Almighty God, the giver of all good gifts, who of thy divine providence hast appointed various orders in thy Church: Give thy grace, we humbly beseech thee, to all who are called to any office and ministry for thy people; and so fill them with the truth of thy doctrine and clothe them with holiness of life, that they may faithfully serve before thee, to the glory of thy great Name and for the benefit of thy holy Church; through Jesus Christ our Lord, who liveth and reigneth with thee, in the unity of the Holy Spirit, one God, now and for ever. Amen.
Posted by Anonymous at 8:40 AM No comments:

Email ThisBlogThis!Share to TwitterShare to FacebookShare to Pinterest
Labels: Anglican Use, Men 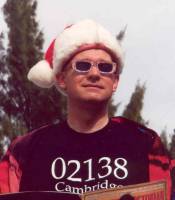 I first heard that aphorism at a holiday party about a decade ago. It’s been around longer than that and I haven’t been able to determine who first said it and when.

On the face the saying makes sense. After all, what better movie for adults who still believe in Santa Claus than Miracle on 34th Street? Besides (watch out for plot spoiler) the picture’s crisis is resolved when a huge federal government agency—the Post Office—comes to the rescue. And with a divorced mother rearing a child alone, Miracle features a non-traditional family, surely a plus in the eyes of liberals.

It’s a Wonderful Life, on the other hand, celebrates the infinite worth of an individual human being, a worth that far exceeds even the biggest financial fortune. In Wonderful Life the hero’s crisis is resolved (another plot spoiler) by the spontaneous voluntary action of family, friends, and local community; emphatically not by the government. The film also shows people in fervent prayer, not to some generic higher power but to the God of the Bible as worshipped in the Protestant and Catholic churches shown full of believers in the picture. That alone must drive some liberals nuts when the film is broadcast over the public airwaves.

But the game can be played the other way. Wonderful Life presents negative stereotypes of bankers, so much so that when it was released some Hollywood observers (but not, as is erroneously asserted on some liberal websites, the Federal Bureau of Investigations) charged that it was a vehicle for communist propaganda. The charge is easy to ridicule today, but in the 1940s communist infiltration of the motion picture industry was a real and serious threat to American values. Now look at the favorable treatment—not to mention free advertising—that Miracle gives to two large department stores! Main Street Republicans surely must find that refreshing compared to the negative views of business that Hollywood gives us today.

The lesson? It’s just a movie! Enjoy them both, or whichever ones you choose to watch this holiday season. Santa’s list does not include your political affiliation, but he does have a lump of coal for those who would strip our public life of all sense of Wonder at the Love of God and thankfulness for all Miracles big and small.
Posted by Anonymous at 10:27 AM No comments:

Email ThisBlogThis!Share to TwitterShare to FacebookShare to Pinterest
Labels: Humor

The Bible in Literature

Do we all holy rites;
Let there be sung Non nobis and Te Deum;
The dead with charity enclosed in clay:
And then to Calais; and to England then:
Where ne'er from France arrived more happy men.

Psalm for Evening Prayer on the Second Sunday of Advent

Psalm 115. Non nobis, Domine.
Not unto us, O LORD, not unto us, but unto thy Name give the praise; * for thy loving mercy, and for thy truth's sake.

Posted by Anonymous at 10:51 AM No comments: