The Hebrew Prophet Samuel Warns Against Rule by a King

Today, a mere week before we celebrate America's Independence from the King of England, the reading at Morning Prayer from 1 Samuel 8:4-18 reminds us of the Manner of the king that shall reign over those who would have a king--

Then all the elders of Israel gathered themselves together, and came to Samuel unto Ramah, and said unto him, Behold, thou art old, and thy sons walk not in thy ways: now make us a king to judge us like all the nations.

But the thing displeased Samuel, when they said, Give us a king to judge us. And Samuel prayed unto the LORD. And the LORD said unto Samuel, Hearken unto the voice of the people in all that they say unto thee: for they have not rejected thee, but they have rejected me, that I should not reign over them. According to all the works which they have done since the day that I brought them up out of Egypt even unto this day, wherewith they have forsaken me, and served other gods, so do they also unto thee. Now therefore hearken unto their voice: howbeit yet protest solemnly unto them, and shew them the manner of the king that shall reign over them.

Posted by Anonymous at 7:18 AM No comments:

Email ThisBlogThis!Share to TwitterShare to FacebookShare to Pinterest
Labels: Anglican Use, Res Publica

The New Liturgical Movement reports that Anglican Convent of All Saints to be Received in Full Communion with the Catholic Church.
Posted by Anonymous at 9:11 AM No comments:

Email ThisBlogThis!Share to TwitterShare to FacebookShare to Pinterest
Labels: Anglican Use

Beer is Proof that God Loves Us... 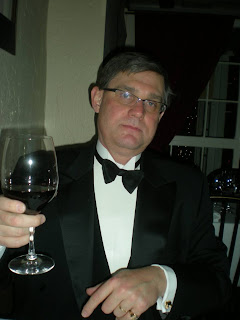 A recent study shows beer better than water after exercise.

This is a good time to set the record straight. Benjamin Franklin did not, as is so frequently asserted, say "Beer is proof that God loves us and wants us to be happy." Anyone who has read his Autobiography knows that Dr. Franlin had a low regard for beer and beer-drinkers.

Dr. Franklin was, however, a wine drinker, and he wrote--


We hear of the conversion of water into wine at the marriage in Cana as of a miracle. But this conversion is, through the goodness of God, made every day before our eyes. Behold the rain which descends from heaven upon our vineyards; there it enters the roots of the vines, to be changed into wine; a constant proof that God loves us, and loves to see us happy. The miracle in question was only performed to hasten the operation, under circumstances of present necessity, which required it. --Letter to Abbé Morellet (1779)

Posted by Anonymous at 8:13 AM No comments:

Email ThisBlogThis!Share to TwitterShare to FacebookShare to Pinterest
Labels: Men

I Pledge Allegiance to the Flag

POST-GAZETTE - Res Publica
I Pledge Allegiance to the Flag
by David Trumbull
June 12, 2009

Sunday, June 14th, is Flag Day, which commemorates the adoption of the flag of the United States by resolution of the Second Continental Congress, June 14, 1777. Since 1966 the week that includes June 14th has been designated National Flag Week.

(a) The flag should never be displayed with the union down, except as a signal of dire distress in instances of extreme danger to life or property.

(b) The flag should never touch anything beneath it, such as the ground, the floor, water, or merchandise.

(c) The flag should never be carried flat or horizontally, but always aloft and free.

(d) The flag should never be used as wearing apparel, bedding, or drapery. It should never be festooned, drawn back, nor up, in folds, but always allowed to fall free. Bunting of blue, white, and red, always arranged with the blue above, the white in the middle, and the red below, should be used for covering a speaker's desk, draping the front of the platform, and for decoration in general.

(e) The flag should never be fastened, displayed, used, or stored in such a manner as to permit it to be easily torn, soiled, or damaged in any way.

(f) The flag should never be used as a covering for a ceiling.

(g) The flag should never have placed upon it, nor on any part of it, nor attached to it any mark, insignia, letter, word, figure, design, picture, or drawing of any nature.

(h) The flag should never be used as a receptacle for receiving, holding, carrying, or delivering anything.

(i) The flag should never be used for advertising purposes in any manner whatsoever. It should not be embroidered on such articles as cushions or handkerchiefs and the like, printed or otherwise impressed on paper napkins or boxes or anything that is designed for temporary use and discard. Advertising signs should not be fastened to a staff or halyard from which the flag is flown.

(j) No part of the flag should ever be used as a costume or athletic uniform. However, a flag patch may be affixed to the uniform of military personnel, firemen, policemen, and members of patriotic organizations. The flag represents a living country and is itself considered a living thing. Therefore, the lapel flag pin being a replica, should be worn on the left lapel near the heart.

(k) The flag, when it is in such condition that it is no longer a fitting emblem for display, should be destroyed in a dignified way, preferably by burning.


[David Trumbull is the chairman of the Boston Ward Three Republican Committee. Boston's Ward Three includes the North End, West End, part of Beacon Hill, downtown, waterfront, Chinatown, and part of the South End.]
Posted by Anonymous at 11:39 AM No comments: