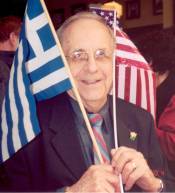 On March 25th 1821 Bishop Germanos of Patras raised the flag of revolution at the monastery of Agia Lavra near Kalavrita and the battle cry of "Freedom or Death" becomes the motto of the revolution. The date was auspicious as it is the Annunciation of the Theotokos, the day that the Archangel Gabriel announced to the Blessed Virgin Mary that she would bear a child. In Boston, Greek Independence Day will also be celebrated exactly a month later, April 25, 2010, with the 16th Annual Greek Independence Day Parade. the theme this year is "Celebrating 2500 of the Battle of Marathon" where the Greeks defeated the Persians in 490 B.C.

More information at http://www.fhasne.com/parade/parade.htm
Posted by David Trumbull at 5:30 PM

Email ThisBlogThis!Share to TwitterShare to FacebookShare to Pinterest
Labels: Notices