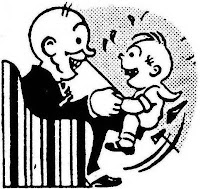 I don't know how I missed this when the City of Boston issued it at the end of October, but even now, after the "Occupy Boston" group has vacated Dewey Square, it is still interesting, not to mention, hilarious, to read what the Boston Public Health Commission, Inspectional Services, Police and Fire Departments really thought about the "occupiers."

I quote directly from "Public Health & Safety Tips from the City of Boston" published October 26th and addressed to "those at Dewey Square":

"Cold weather has arrived and nighttime temperatures will soon be below freezing ... Wear several layers of loose-fitting, lightweight, warm clothing rather than one layer of heavy clothing. The outer garments should be tightly woven and water repellent. If clothing becomes wet, change into dry clothing as soon as possible. Wear mittens over gloves, layering works for you hands too. Wear a hat and cover your mouth with a scarf to protect your lungs."

Now I love to hear Button Up Your Overcoat (1928; music by Ray Henderson; words by B.G. DeSylia and Lew Brown) put over by torch singer Ruth Etting or "boop-boop-a-doop girl" Helen Kane, but, as an adult, when someone suggests that I "get out of these wet clothes" I expect him to follow with "and into a dry martini." I don't expect, at least not after age nine, to need the grown-ups of the city to remind me to wear my hat and mittens. The fact that some person or persons in authority thought it necessary to inform the occupiers that a Boston winter can be cold and damp reflects badly on the intelligence of the occupiers, or the city officials, or maybe both!

Or how about this official City of Boston admonition to Occupy Boston:

"Wash your hands often with soap and water for 20 seconds, after going to the bathroom, before eating, and after coughing or sneezing."

Now that's good advice. It was when I was taught it in kindergarten and I still stand by it, as I stand by this advice from the City of Boston to the occupiers:


"Do not engage in negative behavior, such as fighting, throwing objects, or destroying property."

Shall we add, "biting," "running with scissors," "eating paste," and "stomping your feet and yelling 'Mine' until you get your way." Actually, strike that one as that is the very essence of the occupy movement.

It's good to see that the City of Boston recognized the "99%" for what they are: spoiled kids – in some cases superannuated kids--, and rather slow ones at that.
Posted by David Trumbull at 11:19 AM