“The great rule of conduct for us in regard to foreign nations is in extending our commercial relations, to have with them as little political connection as possible. So far as we have already formed engagements, let them be fulfilled with perfect good faith. Here let us stop.”
—George Washington’s Farewell Address, 1796 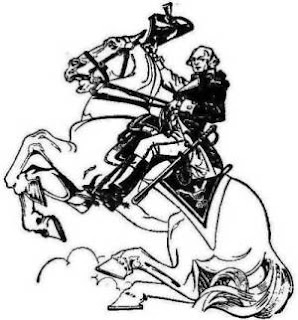 Poor George, both revered and kicked around by us. He was born February 11th but when he was 20 Britain and her colonies finally caught up with Catholic Europe by switching to the Gregorian Calendar, moving his birthday to the 22nd of the month. Then, starting in 1971, the Uniform Monday Holiday Act of 1968 moved the official celebration of his birth to the third Monday in February. In popular parlance we slight our first President by neglecting the legal name of the holiday, WASHINGTON’S BIRTHDAY and refer to it as a generic “Presidents’ Day”.

We likewise neglect Washington’s sage warning against entangling foreign alliances. Even in our commercial relations our leaders, not content merely to trade with the rest of the world, have entered into binding agreements restricting our ability to control our own commerce, to encourage domestic manufacturing, or even to protect our citizens from unsafe products. Our legal obligations to the World Trade Organization and our bilateral and multilateral trade agreements entangle us in a network of supra-national laws that can, effectively, overturn the actions of our elected Congress and President.

Imports of unsafe toys were, briefly leading up to Christmas 2007, a big news story. After years of shopping only for price, Americas woke up to find that an estimated 75 percent of all toys on the market were the products of one nation—China—which had been exposed as tolerating a manufacturing industry criminally unconcerned with the safety of her consumers half-way ‘round the globe. Worse, Americans found they had few options. Decades of failed public policy had driven much light manufacturing from our States where we could have monitored working conditions and inputs. Binding WTO obligations prohibited the U.S. taking any effective prompt and broad action to restrict imports from a known offender.

That leaves The U.S. Consumer Product Safety Commission, a relatively small federal bureaucracy, in charge of protecting the public from unreasonable risks of serious injury or death from more than 15,000 types of consumer products under the agency's jurisdiction. Daily the CPSC issues new notice of recall of some product or other than is a risk for explosion, fire, strangulation, lead poisoning or other threat to human health, safety or even life.

In my industry, textiles, has issued hundreds of notices of recall of dangerous—, potentially fatally so—consumer products. It will be no surprise to anyone who has followed the news that all three involved imported—Chinese and Korean—products. On our industry association blog, http://nationaltextile.blogspot.com/ I have started posting, as a public service, links to CPSC recalled of textile and apparel products. The safe consumer is the informed consumer—Caveat emptor.
Posted by David Trumbull at 8:16 AM No comments: 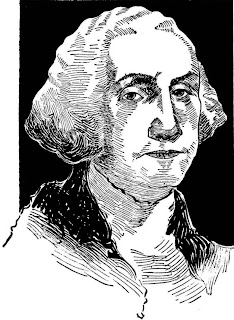 Today is WASHINGTON’S BIRTHDAY, a federal and state holiday to honor the hero of the Revolutionary War, the Father of His Country, and the first President of the United States. Of the 43 men to serve as chief executive of the Union, only Washington is so singled out for honor with a federal holiday.

That many persons now call the third Monday in February “Presidents Day” is an indicator of our lack of discrimination and devaluing of true accomplishment and fame. To put it in perspective, Catholics believe that each of the 265 popes was the Vicar of Christ on Earth, infallible in matters of faith and morals, and yet fewer than 80 have been added to the calendar of Saints (and no less erudite writer than Dante placed some of the popes in Hell), but common American usage honors equally the great Washington and the least noble and least accomplished of men to hold the office by jumbling them all together on “Presidents Day,” the equivalent of declaring each a “secular saint.”

Slighting of Washington by calling his birthday “Presidents Day” also errs by neglecting the 29th of May, which by state law (Mass. Gen. Laws Chap. 6 Section 15VV) is our PRESIDENTS DAY, in memory of John Adams, John Quincy Adams, Calvin Coolidge and John Fitzgerald Kennedy, former presidents from the Commonwealth

Virginia, home of eight presidents, including Washington, beats us out in total number. But here in the Bay State we have something the Old Dominion lacks. We have in our midst the Washington Library—About 800 books and pamphlets from George Washington’s personal library at Mount Vernon given to the Boston Athenæum by a group of Bostonians in 1848. The books themselves are priceless and only serious scholars need apply for permission to use the collection. However, in 1997 the library published a catalog so the rest of us can see what sort of books the great man was reading.

Books on history and government from Washington’s library include his personal copy of Common Sense, the tract by Thomas Paine that was so influential in promoting the revolutionary spirit. The General, of course, had several books on military science. Remembering that Mount Vernon was a working farm, we are not surprised to find books on agriculture and practice arts such as carpentry and horsemanship. President Washington’s mind ranged beyond those necessary topics, for we also find books on religion, linguistics, and poetry.

I could lump Washington in the same group with some of the lesser men who occupied the White House—but that would be a lie.
Posted by David Trumbull at 1:08 PM No comments:

Getting It Off Your Chest


POST-GAZETTE - Res Publica
Getting It Off Your Chest 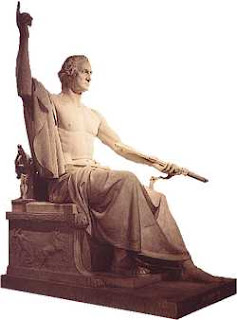 It is said that Ronald Reagan always put on his suit-coat and would never step foot in the Oval Office of the White House in his shirtsleeves, such was his respect for the office of the Presidency of the United States.
In 1840 much of the city of Washington was shocked by the installation, in the Capitol Rotunda, of a sculpture of George Washington, bare to the waist in the manner of a classical Greek statue of Zeus, by Boston artist Horatio Greenough (1805-1852).
“The man does not live, and never did live, who saw Washington without his shirt!” said Virginia Congressman Henry A. Wise (1806-1876). And Boston’s leading architect, Charles Bulfinch (1763-1844), said the work of art made the Father of Our Country look like he was “entering or leaving a bath.” The outcry was such that the statue was moved outdoors and neglected for several years. It is now in the Smithsonian National Museum of American History.
Earlier this month New York Congressman Christopher Lee resigned after press reports that the married man had posted a shirtless photo of himself in response to a personal advertisement on craigslist. Meanwhile, freshman Tennessee Congresswoman Julia Hurley credits her previous job at Hooters restaurant for her success. Well, I guess they both just wanted to put the “party” back in Republican Party. As the ancient Roman statesman M.T. Cicero said “O tempora o mores,” which translates roughly to “where are we going and what are we doing in this hand-basket?” As always, be sure to turn to the pages of the Post-Gazette to stay abreast of the news.


Posted by David Trumbull at 10:26 AM No comments: