A Fortnight for Freedom 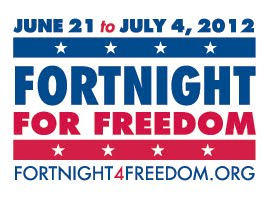 Intolerance -- official state-sponsored intolerance -- is on the rise in American to an extent not seen since the heyday of the Ku Klux Klan in the 1920s or even the period of the "Know Nothings" in the mid 1800s. America's Catholic bishops have characterized the Obamacare HHS mandate as unconstitutional. It is unconstitutional.

On Friday, June 8th, several hundred of us gathered on Boston Common to rally against the mandate's unconstitutional interference with the free exercise of religion. We were Catholics, Protestants, Jews, and even a few non-believers who understood that the issue is not the Church's teaching on sexuality, but our Constitutional freedom as Americans to practice religion, or no religion, unimpeded by unjustifiable government intrusion,

The Catholic bishops have called for the fourteen days from June 21st to July 4th to be dedicated as “fortnight for freedom.” and have issued the following Q & A to explain what is at issue.

"What do we mean by religious liberty?

"Religious liberty is the first liberty granted to us by God and protected in the First Amendment to our Constitution. It includes more than our ability to go to Mass on Sunday or pray the Rosary at home. It also encompasses our ability to contribute freely to the common good of all Americans.

"What is the First Amendment?

"The First Amendment of the U.S. Bill of Rights states the following: “Congress shall make no law respecting an establishment of religion, or prohibiting the free exercise thereof; or abridging the freedom of speech, or of the press; or the right of the people peaceably to assemble, and to petition the Government for a redress of grievances.”

"What does “shall make no law respecting an establishment of religion” mean?

"This phrase, known as the “Establishment Clause,” started out as a prohibition on Congress’ either establishing a national religion or interfering with the established religions of the states. It has since been interpreted to forbid state establishments of religion, to forbid governmental preference (at any level) of one religion over another, and to forbid direct government funding of religion.

"What does “prohibiting the free exercise thereof” mean?

"This phrase, known as the “Free Exercise Clause,” generally protects citizens and institutions from government interference with the exercise of their religious beliefs. It sometimes mandates the accommodation of religious practices when such practices conflict with federal, state, or local laws."

Obviously the bishops know the Constitution, which is more than we can say for our "constitutional scholar" President.
Posted by David Trumbull at 7:09 AM No comments:

Cardinal Sean is asking Catholics to recite this prayer for religious freedom as part of the "Fortnight for Freedom" initiative which runs from June 21 to July 4.

Almighty God, Father of all nations, for freedom you have set us free in Christ Jesus. We praise and bless you for the gift of religious liberty, the foundation of human rights, justice and the common good. Grant to our leaders the wisdom to protect and promote our liberties; by your grace may we have the courage to defend them for ourselves and for all those who live in this blessed land. We ask this through the intercession of Mary Immaculate, our patroness, and in the name of your Son, our Lord Jesus Christ, in the unity of the Holy Spirit, with whom you live and reign, one God, for ever and ever. Amen.
Posted by David Trumbull at 12:23 PM No comments:

Email ThisBlogThis!Share to TwitterShare to FacebookShare to Pinterest
Labels: Freedom of Religion, Prayer

The Last Hope of Mankind

Last week I discussed the first half of Daniel Webster's First Bunker Hill Oration; here, in time for Bunker Hill Day, is the rest.

After his brief summary of the history of America, from Christopher Columbus to the Battle of Bunker Hill, our guide, Daniel Webster, next surveys the fifty years since the battle and finds progress both in America and abroad although not at the same pace, which he compares to "vessels on a common tide, propelled by the gales at different rates, according to their several structure and management, but all moved forward by one mighty current, strong enough to bear onward whatever does not sink beneath it." Knowledge, he says, has triumphed and mankind in 1825 are, "better fed and better clothed . . . they are able also to enjoy more leisure; they possess more refinement and more self-respect. A superior tone of education, manners, and habits prevail." More importantly, he finds those past fifty years to have been given over to "the great question of politics and government."

“A great wheel of political revolution," says Webster, "began to move in America." He compares the guarded regularity and safety of that wheel's rotation in America with its irregular and violent impulses elsewhere and concludes that America was fortunate in the condition of the land and character of the populace at the time of our Revolution. Americans, while under the authority of the mother country, had, nevertheless, many years' experience of self-government as regards internal matters and were accustomed to some of the basic elements of our Constitution: representative bodies, division of power, and checks and balances. He credits the character of the American people -- sober, moral, and religious -- for the restraint from plunder and spoil that might otherwise have attended our Revolution.

Webster exhorts Americans to exult in the conviction that our Revolution was a beneficial example to the world. It is, however, an example that he would not necessarily apply as a template. "We are not propagandists," he says. "Wherever other systems are preferred . . . we leave the preference to be enjoyed." However, given the favorable circumstances of America's experiment in democratic government he concludes that if the representative system fail here, it is unlikely to ever succeed. With America, he asserts, rests "the last hope of mankind." this is a phrase that will be echoed by Abraham Lincoln in his December 1862 Annual Message to Congress ("the last best, hope of earth") and Ronald Reagan in his January 1974 "We Will Be a City on a Hill" speech ("the last best hope of man on earth").
Posted by David Trumbull at 2:45 PM No comments:

America: Prodigy of Modern Times, the Wonder and the Blessing of the World.

POST-GAZETTE - Res Publica
America: Prodigy of Modern Times, the Wonder and the Blessing of the World.
by David Trumbull - June 8, 2012

From last week's subject, Martin Lomasney, remembered for saying, "Don't write when you can talk, don't talk when you can nod," I turn to a man who was never shy about speaking. Daniel Webster, one of our greatest orators, in his 1825 address at the laying of the corner-stone of the Bunker Hill Monument, took the occasion to sketch a history of America of her people and their character.

In the introductory paragraphs he sets forth the purposes of the speech: (1) to move the listeners to an appreciation of the sacrifices of their ancestors; (2) to place the Battle of Bunker Hill as a pivot point in American history; and (3) to sketch a likely future of American prosperity.

He begins, not with the battle, nor even the War of Independence, but with the discovery of America by Christopher Columbus and continues through the early English settlements of North American -- in New England in 1620 by the Protestant Pilgrim Fathers and in Maryland in 1634 by Roman Catholics -- passing to "that prodigy of modern times, at once the wonder and the blessing of the world," the American Revolution. Webster justifies the erection of a monument to the first great battle of the revolution by pointing to the happiness and prosperity of America fifty years later, to the New World generally shaking off European colonialism, and to both Europe and American progressing in knowledge, legislation, commerce, in the arts, in letters, and in freedom since the American Revolution inaugurated a new age in the world. 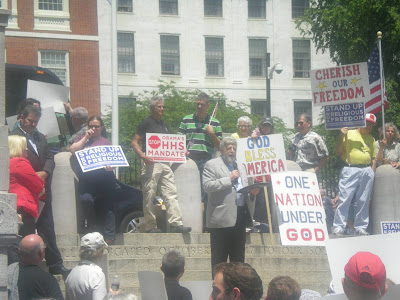 Above, Don Feder addresses the June 8th Boston "Stop Obama's HHS Mandate / Stand Up for Religious Freedom" Rally. Note how Webster traces the origin of the United States not to the 1607 English settlement in Virginia, an essentially commercial enterprise, but the Protestants of Massachusetts and the Catholics of Maryland who came to America for religious liberty.


Returning to the subject at hand, Webster addresses the survivors of the Battle of Bunker Hill, about 40 of them, present. He pays homage, by name, to some the heroes of that battle who have since been gathered to their fathers. Finally, he addresses all the veterans of the Revolutionary War.

Having addressed the men who had served in the war, Webster turns to the narration of the events leading to, and proceeding from, the Battle of Bunker Hill. He traces the conflict to the Intolerable Acts passed by the British Parliament in 1774. He discourses on how the British suppression of Boston, rather than bringing the other colonies back to obedience to British authority, drove the 13 colonies together in a common rebellion against British outrages. He rehearses how resistance to British mis-rule turned bloody at the April 19, 1775 Battles of Lexington and Concord and how New England united with "one cause, one country, one heart" for the June 17, 1775 Battle of Bunker Hill. Bunker Hill, he asserts, transformed the patriot cause from a local insurrection to a full-blown war of independence and inspired the world by showing that Americans were prepared to die for freedom.

Next week, Part 2 of Webster's 1st Bunker Hill Oration.
Posted by David Trumbull at 11:50 AM No comments:

Many Post-Gazette readers will recognize the saying, by Martin Lomasney, that heads this column. It is one of the few things ever uttered by Lomasney (1859-1933) that made it into writing. Lomasney, as Democrat Ward Boss of Boston's old Ward Eight (now Ward Three), is one of Boston's most storied political figures.

Lomasney himself gave, in an interview with reporter Lincoln Steffens, probably the best definition of "ward boss" when he said, "There's got to be in every ward somebody that any bloke can come to-no matter what he's done-and get help. Help, you understand; none of your law and justice, but help." In return for that help the boss expected the bloke to vote the way the boss dictated.

The ward bosses of the 19th and early 20th century had tremendous power. With the power of the bosses came enemies. On March 7, 1894 Lomasney received a bullet wound in the leg in an unsuccessful assassination attempt. His assailant, James A. Dunan, blamed Lomasney for a dispute he had with the Boston Board of Health.

Dunan told a policeman at the scene, "I had a good reason for doing it. If you knew as much as I do, you would have done it yourself. He is a villain and anything but a friend of the unemployed." Lomasney is reported to have said something along the lines of, “The people didn't think an awful lot of aldermen, but they didn't think we ought to be shot without a fair trial." As for Dunan, he was committed to the Worcester insane asylum.

Martin (the "Mahatma") Lomasney is the subject of a show at the West End Museum. The exhibit, which runs through August 4th, is curated by West End Museum Executive Director Duane Lucia. The exhibit reception takes place on June 16th at 6 p.m. and is free and open to the public. Guests will enjoy light refreshments, including the “Ward Eight”—a cocktail created in 1898 at Locke-Ober in honor of Lomasney’s election to the state legislature and the district largely responsible for his victory.

Posted by David Trumbull at 9:38 AM No comments: