Last Friday, March 23rd, over 50,000 concerned citizens gathered at public rallies in over 100 American cities to Stand Up For Religious Freedom. The Boston rally was well attended, in spite of change of location to the Boston Common less than 48 hours prior to the rally and an erroneous rumor that it was being cancelled entirely.


For me the highlight of the Boston rally was C.J. Doyle, Executive Director of the Catholic Action League of Massachusetts (www.catholicactionleague.org), addressing the substantial arguments against the constitutionality of the Obama Administration's Department of Health and Human Services mandate that religiously affiliated hospitals and other institutions purchase products and services they find morally impermissible.


Mr. Doyle spoke of an earlier state attack on freedom of religion and how the United States Supreme Court ruled, unanimously, that such attacks against Church-related institutions were "repugnant to the Constitution and void."


In 1922 the Ku Klux Klan in the state of Oregon pushed for passage, by popular initiative, of a law to ban private schools and to require all children to attend state schools. When Republican governor Benjamin W. Olcott issued a 1922 executive proclamation condemning the Klan that violent organization put its support behind the election of a new governor, Democrat Walter M. Pierce, who supported the anti-Catholic school ballot initiative.


The Klan celebrated two victories in the November 1922 elections in Oregon, the anti-Catholic bigot, Democrat Pierce, defeated Republican Olcott for governor, and the voters enacted the anti-Catholic school law.


The Society of Sisters of the Holy Names of Jesus and Mary sued to stop enforcement of the law and the case went, in 1925, to the U.S. Supreme Court where the law was held unconstitutional under the due process clause of the Fourteenth Amendment. The court declared:


"The fundamental theory of liberty upon which all governments in this Union repose excludes any general power of the State to standardize its children by forcing them to accept instruction from public teachers only. The child is not the mere creature of the State; those who nurture him and direct his destiny have the right, coupled with the high duty, to recognize and prepare him for additional obligations."

This past week the court heard arguments regarding the unconstitutional Obama health care law. Undoubtedly it, too, will be struck down in whole or in part.
Posted by David Trumbull at 11:54 AM No comments:

The controversy over President Obama's HHS Mandate is now pouring out onto the streets. On March 23, concerned citizens in over 100 cities will gather at federal buildings for a rally with the theme "Stand Up for Religious Freedom—Stop the HHS Mandate!" 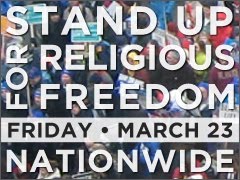 The rallies are scheduled from noon to 3:00 p.m. and in Boston will be at the J.F.K Federal Building in Government Center. Rallies will also be held in New Hampshire, at the federal building in Concord, and in Rhode Island, at the federal district court in Providence.

Thousands of Americans of all faiths are expected to participate in these rallies to oppose the new mandate from the U.S. Department of Health and Human Services that requires all employers provide free contraceptives, sterilization and abortion-inducing drugs through their health plans. Religious leaders and other public figures will speak out against the HHS Mandate.

The HHS provided a "religious exemption" so narrow that it would exclude Catholic hospitals, universities and charities, forcing these institutions to act in direct opposition to Catholic teaching through the health care plans they provide.

The Catholic bishops are supported by organizations representing the Jewish faith, as well as Protestant, Anglican, and Orthodox Christian bodies, in opposing this Obama Administration violation of the First Amendment right to freedom of religion. In addition, seven states -- Florida, Michigan, Nebraska, Ohio, Oklahoma, South Carolina and Texas -- are suing the Obama Administration to stop this violation of basic human rights.

"With the HHS Mandate, the Obama administration has presumed upon itself the authority to decide what counts as a religious institution in this country," said Eric Scheidler, executive director of the Pro-Life Action League. "This is an unprecedented attack on the free exercise of religious faith protected by the First Amendment."

"The Obama mandate is a complete affront to religious liberty," said Monica Miller, director of Citizens for a Pro-Life Society. "Persons of faith or no faith at all should be alarmed at Obama's riding rough-shod over the conscience of American citizens. We are calling on all people of good will to rise up and vigorously oppose this ruling."

More information is available at the website http://standupforreligiousfreedom.com/. There you will find information in rallies in other cities

On Friday, March 23rd, join Liberty activists of all faiths - and no faith - as we demonstrate FOR RELIGIOUS FREEDOM and against the HHS contraception mandate.
Posted by David Trumbull at 3:33 PM No comments:

A Heart-Warming Story for a Monday Morning.

In West Cambridge, Massachusetts, there is a small, low-powered A.M. radio station, WJIB (AM 740), owned for the past couple of decades by Bob Bittner. Bob plays music of the 1930s through 1970s on the station which accepts no paid advertising, but, rather, relies on contributions from listeners (and unlike the much larger and well-known "public radio" takes no tax money -- it truly is "listener supported"). By Federal Communication Commission rules, Bob has to turn down the power at dusk and can turn it back up at dawn. Once the sun goes down we can't get WJIB in our apartment in Boston, even though it is close enough that from the roof of our building we can see his West Cambridge neighborhood!

Well, in the early hours of Sunday, Bob was up 'til five o'clock in the morning tinkering -- refining -- some of the settings to improve sound quality, after which, tired from a long night he went into a deep sleep. (I should have mentioned that Bob practically lives at the station.) Well dawn with her rosy fingers came, but no WJIB, only static. Turns out that when the station when to full power it blew out the changes he had made and rather more along with them.

Now, Bob's listeners are no you average radio public. They called the Cambridge police, concerned that Bob was ill or injured! By 7:35 a.m. the police were banging on the door and windows of the station. Such is the affection WJIB listeners have for the station and it's remarkable owner!
Posted by David Trumbull at 8:33 AM No comments:

Whose Ox Is Being Gored

POST-GAZETTE - Res Publica
Whose Ox Is Being Gored
by David Trumbull -- March 9, 2012

"The numerous academies in New England have been established substantially in the same manner. They hold their property by the same tenure, and no other. Nor has Harvard College any surer title than Dartmouth College. It may to-day have more friends; but to-morrow it may have more enemies. Its legal rights are the same... They are founded by private persons, and on private property. The public cannot be charitable in these institutions. It is not the money of the public, but of private persons, which is dispensed. It may be public, that is general, in its uses and advantages; and the State may very laudably add contributions of its own to the funds; but it is still private in the tenure of the property, and in the right of administering the funds."

The quotation above is from Daniel Webster's 1818 argument before the United States Supreme Court in the Dartmouth College case. At issue was whether the government, in this case the State of New Hampshire, could tell a private corporation, Dartmouth College, what to do. I thought of this celebrated case recently when I read that the United States Conference of Catholic Bishops plans to pursue both "legislative and judicial efforts to restore respect for religious freedom in the nation."

The points-at-law raised successfully by Webster in the Dartmouth College case -- the constitutional prohibition of ex post facto laws and the inviolability of contract -- differ from the First Amendment freedom of religion and speech arguments likely to be used in the bishops' brief, however, the parallel in the implication of the cases is forceful.

The Obama Administration demands that Catholic institutions bend to the will of the state and violate their consciences by either (1) paying for what they find morally impermissible or (2) abandon corporal works of mercy such as hospitals. As they can do neither 1 nor 2 and remain Catholic, Obama is, in essence, attacking the very existence of the Catholic Church in America. It is much as when the legislature of New Hampshire acted to dissolve Dartmouth College and reconstitute it along lines more conformable to the state's notions for the organization of a college.

Honest liberals of all religions or no religion who cherish their liberties should be as concerned as Catholics now are over the Obama Administration's threat to religious liberty. As I wrote here two weeks ago, if Obama can do this, then any President, liberal or conservative can force anyone to do anything he wants. To paraphrase Webster, other institutions (perhaps some dear to liberals now applauding the Administration's health care ruling) may to-day be stronger and have more friends than the Catholic Church, to-morrow they may have more enemies. To-day it is the bishops' ox. If this state over-reach into the private realm is successful, who knows whose ox will be next.
Posted by David Trumbull at 9:05 AM No comments:

Amazing Grace How Sweet the Sound

Last evening I again attended the vigil Mass at the local Novus Ordo parish and made notes regarding the hymns.

The processional hymn was, as it was last week, the Anglican hymn Lord, Who Throughout These Forty Days set to the tune St. Flavian.

At the offertory we sang Amazing Grace! by Anglican clergyman John Newton, set to the beloved tune New Britain. Some Catholics object to this hymn (for example, see this video by Michael Voris alleging that some words and phrases betray a Protestant understanding. Certainly, one can read the words of "Amazing Grace!" as teaching a Protestant -- specifically Calvinist -- doctrine of salvation, but then again, you can find plenty of individual words and phrases in St. Paul's and St. Augustine with which to condemn them as heretics if you start out looking for heresy. Equally, one can find in "Amazing Grace!" orthodox Catholic teaching regarding salvation. If you want to find hymns that are truly suspect as regards their theological assumption, you'll find a much richer target in some the "Catholic" hymns of the past forty years. Three weeks ago I wrote about the hymn "All My Days" by Dan Schutte which appears to reject a Christological reading of the Psalms going back to the earliest days of the Church in favor of a dubious individualistic reading.

The post-Communion hymn, "Gift of Finest Wheat" by Robert E. Kreutz was another example of unsingable "contemporary" Catholic hymnody. This train-wreck of a tune starts in 4/4 time, then after two measures switches to 3/4 time for a few measures, then back to 4/4 time for one measure, only to conclude in 3/4 times.

We concluded with the 18th century Catholic hymn "Grosser Gott" by Ignaz Franz in the 19th century Catholic translation Holy God We Praise Thy Name by C.A. Walworth. It is a paraphrase of the ancient Latin hymn Te Deum Laudamus.
Posted by David Trumbull at 9:51 AM No comments: